Danny has performed as a featured soloist with the South Bend Symphony and in Breda, Holland with members of the Metropole Orchestra. Danny’s compositions have been featured in movie soundtracks, Wedding Bell Blues, and Kill Me Later as well as commercials for JD Powers.

Check out Danny's original music and his new Album Night Rider on Blujazz. 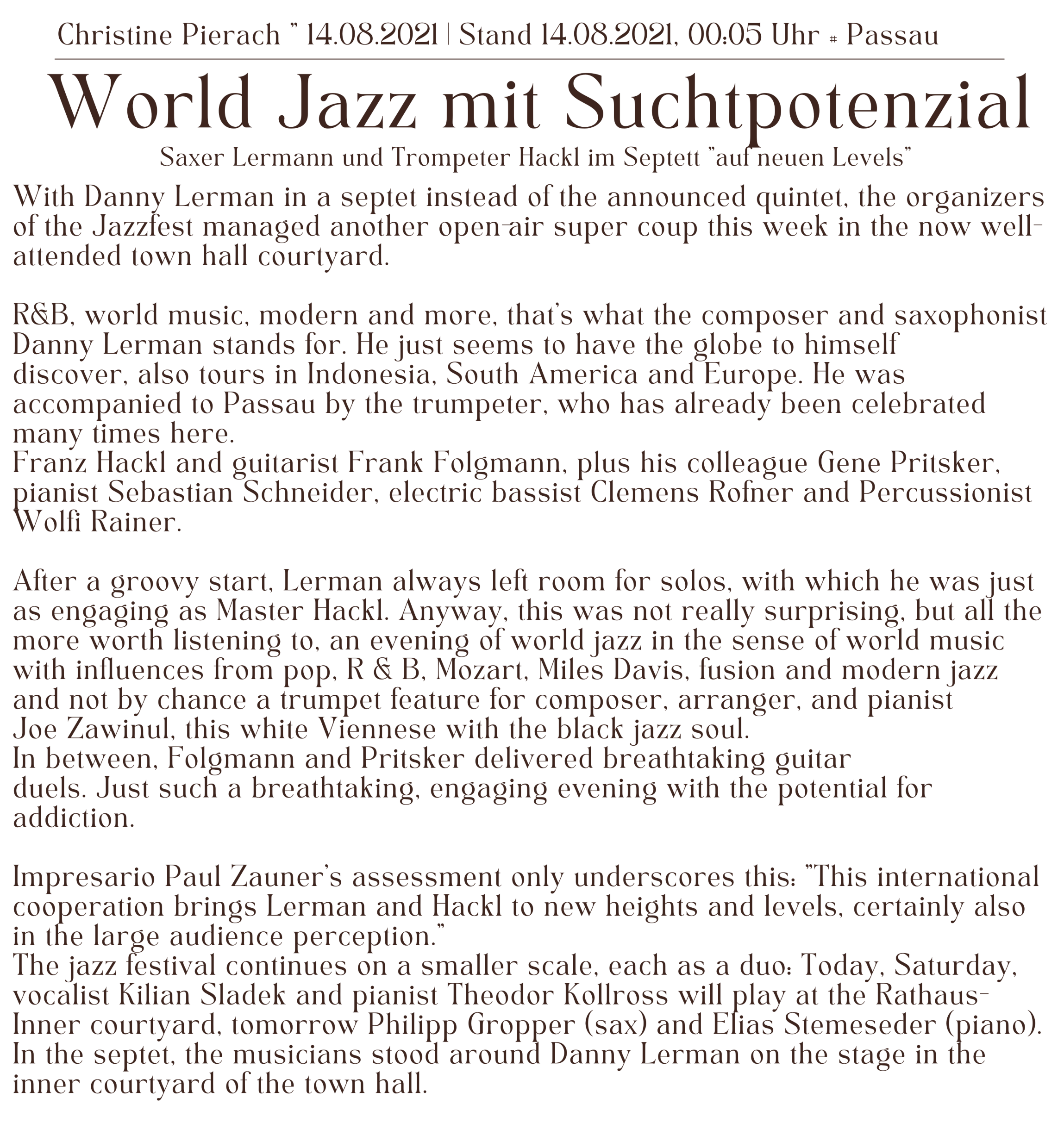 Saxist Danny Lerman puts together a soulful ep on this latest release. You get some AWBish sizzling funk on “Mendi” and a snazzy bass line on “Boris The Cat” with a nice solo by Lerman in the latter. Some rich vocals make for an R&B fest on “Dream of Me Tonight” and the team shuffles to his voice on “Do You Feel?”, making the half hour of music fit for your dancing shoes.

The fact that Danny Lerman’s new album title Meow Baby comes from a line in an episode of Kojak proves that saxophonist Danny Lerman knows how to have fun. He also knows retro cool when he sees it. Lerman took a page from the 1970s when recording his second album, Meow Baby, which will be released February 26th on Sugar Whiskey Records, his label, distributed by Lightyear Entertainment/EMI. Danny adopted old school sensibilities by utilizing live musicians and having a hand in writing all the new compositions for the disc. Tal Bergman, who worked on Lerman’s debut album, produced ten songs on Meow Baby and a few tracks were produced by urban-jazz icon Norman Connors. Radio programmers are already whetting their appetite for the CD with “Gotcha!,” a deep-pocketed groove that bursts into a chorus as sweet as one of Kojak’s Tootsie Pops.

Since his last album release, Lerman traveled and performed around the world, including Turkey, Israel, Holland, South Africa, Venezuela and Mexico. He brought influences and musicians from the countries he visited into the studio when recording Meow Baby. While the tracks swing towards contemporary jazz, urban and adult pop, there are also traces of World Music, Middle Eastern, Latin and South African rhythms. The South Bend, Indiana native, who plays alto and soprano sax, recorded the majority of the collection in Los Angeles where he was joined by Randy Brecker, Hubert Laws, Howard Hewett, Paul Jackson Jr., Bobby Lyle, and Munyungo Jackson. Bergman, who played drums on records by Rod Stewart, Billy Idol, Loreena McKennitt, Herb Alpert, and Chaka Khan, was behind the drum kit on most of the album.

“Tal brought infectious rhythms that were both exciting and exotic. His strong rhythmic influences made the tracks spicy,” explained Lerman. “I wanted this record to be a glimpse into my world, including some of the friends that I’ve made in my travels. I put both myself and the places I’ve been into the music. There’s definitely variety on this record; you don’t know what’s coming next. I’ve found some great players from all parts of the world and they brought their unique perspective to the album.”

Danny got his first job at age 13 with a jazz big band, then studied with Charles Atkins, who taught Motown Icon, Jr. Walker and Danny’s uncles, jazz musicians in their own right.

Danny went to Babson College, to play ice hockey, but followed his musical dream to the Berklee College of Music in Boston, then on to graduate from the University of North Texas. “I met some great song writers there such as Tim Kobza and Marc Sutch and was inspired to write and record the music that had been singing in my head.”

Lerman composed and recorded his first CD, Do you Feel? in South Bend, Indiana and built his name touring the Midwest. “At North Texas they didn’t teach me how to dance or front a band. I learned on the job, at least fronting the band.”

Danny partnered with producer Tal Bergman for his next CD, Danny’s Island, performing and writing with bassist, Oskar Cartaya and flutist, Dave Valentine The CD Danny’s Island, reached the top 20 on the Contemporary Jazz charts of record industry publication Radio & Records, and the single, Take My Breath Away, reached the #1 position on the playlist of WGCI, Chicago's number one urban music station.

Danny’s compositions are also featured in the movie soundtracks “Wedding Bell Blues,” and “Kill Me Later”. As a special treat, Take My Breath Away, will be re-issued as a bonus track on “Meow Baby”.